Allyship in 2018: Activating Your Ally Voice 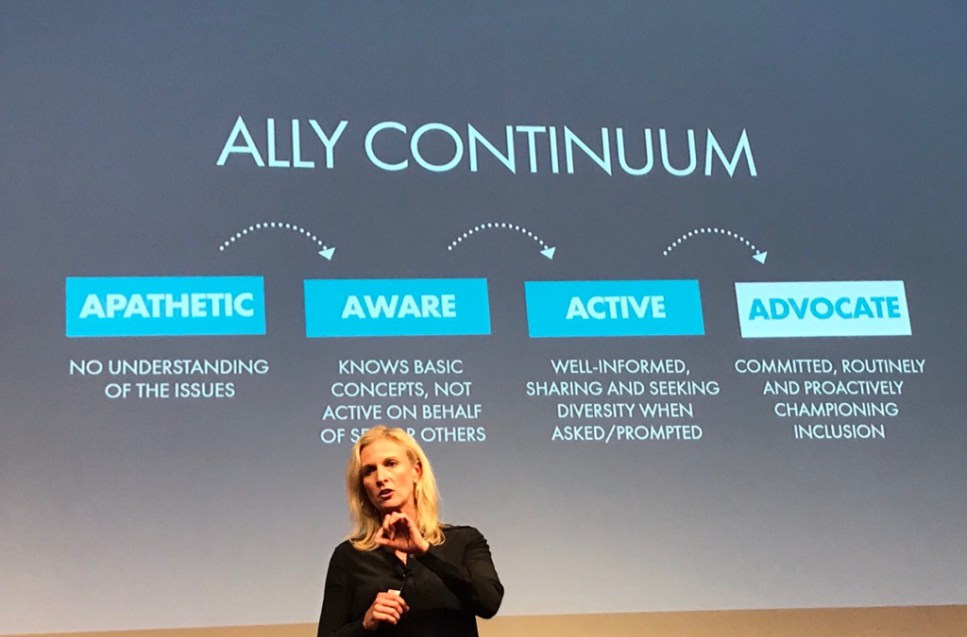 You can also listen on iTunes, Stitcher, and Google Play.
—

In this minisode, Jennifer discusses the importance of sharing stories from underrepresented groups, as well as the fear and risk that can go along with sharing a stigmatized identity. Jennifer also shares the important role that allies have to play in creating a safe space where diverse talent can be recognized and heard, how to encourage allies to take a stand, and shares a case study in allyship.

In this episode you’ll discover:

Listen in now, or read on for the transcript of our conversation:

DOUG FORESTA: Welcome to The Will to Change. Again, you may notice that this is not Jennifer Brown; this is, in fact, Doug Foresta, producer of Will to Change, but Jennifer is with me today.

We are doing these “minisodes” where Jennifer is sharing your reflections on themes from the podcast. Jennifer, welcome.

DOUG FORESTA: Thank you. It feels weird to be welcoming you to The Will to Change.

JENNIFER BROWN: I know. (Laughter.) Feels good. I love it.

DOUG FORESTA: Absolutely. We were looking at some themes that have emerged now that you’ve done over 20 episodes of The Will to Change.

One them, which is inherent in the very nature of the podcast—everyone has a diversity story—is the importance of sharing your voice.

One of the things I wanted to ask you: It’s easy to say, “You should share your voice.” But for people who have been traditionally marginalized and oppressed, what tips do you have for actually sharing your story in a way that people can hear it and in a way that’s safe to do?

JENNIFER BROWN: Kenji Yoshino and I talked about his uncovering talent research in one of our episodes.

The storytelling, then, is counter to bringing our stories forward and using our voice. I think it works on a subconscious level. When you’re telling yourself that you have a stigmatized identity and you develop this muscle and habit around downplaying it, how can you then turn around and tell a story, which often is vulnerable, personal, and sometimes about that very stigmatized identity and how it’s impacted you? The telling of that kind of story is, of course, what shifts other people’s “ah-hah” moments. It creates that personal experience with you where somebody may never be the same again when they hear you share what it’s like to be the only African American in a team or in a building—and I’m not kidding about that.

JENNIFER BROWN: Yes. Once you hear that, you can’t unhear it. For those of us who have gotten really good at covering our unaccepted identity, or we fear that it won’t be accepted, we’ve got to continue to challenge ourselves to push into the fear and look at it for what it is, and not what our perception of it is, number one. And then remember that we’re doing this for somebody else, too. We are teaching or witnessing or sharing and going out on a limb or taking a risk so that we can give that chance to somebody else to have an “ah-hah” moment.

Many of us feel tired and fatigued from doing this work. That’s why, for example, you’ll hear the conversation that’s going on in the last months about how it shouldn’t be incumbent on women or people of color to always be the ones who are teaching what it’s like to be a woman and a person of color.

JENNIFER BROWN: We need white people to step up. We need men to step up because we’re tired, and because we will be listened to differently. That is a very true statement. We have so much data to back that up.

The calculation and the effort that it takes, we call that the “tax” on being different. Vivienne Ming talked about this in my very first episode ever.

JENNIFER BROWN: We come into rooms and we’re doing this double duty. We are doing the math around safety at the same time as we’re trying to present the material we’re actually there to present. We’re imagining, perceiving, predicting—and maybe wrongly sometimes. Always asking, “How do I avoid that whole concept of stereotype threat?” Claude Steele talks about this in his wonderful book, Whistling Vivaldi. Do I need to distance myself from who I am in order to be heard?

To me, that’s a really tragic set of activities that many in our workforce are undertaking every single time they walk into a room. That’s why I say storytelling is most powerful and easiest for people in the majority, because it’s less risk for them. This is where allies come into the field.

For those of us who are tired or who are taking these risks over and over with negative impact to our image, this is where allies can be the cavalry. They can come in and say, “Let me take care of that conversation. Let me be the one who raises that feedback.”

DOUG FORESTA: What would that look like, Jennifer? Can you say more about what that would look like for allies?

JENNIFER BROWN: Yes, certainly. Some allies are allies without even knowing they’re allies. It’s interesting, for those of us who need allyship, it can be as simple as going to somebody and saying, “Thank you for standing up for me. Thank you for mentioning that. Thank you for having my back and backing me up in that meeting like you did.”

For LGBT people, of course, it’s straight allies. It’s somebody who says, “This policy or this set of benefits at this company is not okay, and I’m going to take that on and fight that battle for you.”

JENNIFER BROWN: And that whole thing spins out. Thank an ally. They may not even know what an ally is. Probably everyone listening to this either has done this for someone and didn’t have the language for it, or they’ve had somebody step in for them on their behalf to help them take the heat, to be the tip of the spear—fill in whatever cliché you want.

What we’ve got to do is reinforce that. Point it out to somebody and say, “What you did there really made a difference for me because it was something that I didn’t have to do.” And then they will say, “Really? It was so easy for me to do. Well, I can do that again; I can do it more. What do you mean? Tell me more about what I can do.”

DOUG FORESTA: And that’s what you said, people say, “I didn’t even know I was being an ally.”

JENNIFER BROWN: I know. I know.

DOUG FORESTA: “I was just speaking my mind.”

JENNIFER BROWN: It’s great. I have somebody on my team, Nancy Mace, who I just love and is such a huge LGBT ally. She tells this exact story about somebody turning to her in the LGBT community and saying, “Thank you for doing that.” And she said, “What do you mean? To me, this is common sense, it’s fair, and it’s a way that I can contribute.”

How can we reinforce that and tell people that what you’re doing, give them the context for the importance of what they’re doing. Ask them to do it more, and then tell them to look for other people who are similarly minded and passionate to be other allies.

When you see ally communities come together, they teach each other, they push each other. They can discuss as a group, “What other things can we be doing to use our social capital, our positions, our job titles, or our relatively less risky identities to fight on behalf of all the underrepresented communities at the company?”

I often seen CEO and C-suite leaders—most of whom are white, many of whom are male—stepping up to say, “I want to do more. Tell me what I can do.”

I had one ally who said to another ally executive, “Can you wear this pride pin? And can you come to National Coming-Out Day and do the opening?” That was ally-to-ally teaching. There was no LGBT person in that equation.

And the senior executive leader—a straight, white guy—said, “Sure, I can do that.” He put the pin on, he prepares, he does all his homework, and he goes in and kicks off the meeting. Everyone’s shocked because he’d never talked about anything like this before. He was speaking a little bit uncomfortably at first, but then he loosened up, warmed up, he went off script. It ends up being this thing that just goes viral because people say, “Whoa, one of our straight, white, male executives is an ally. I didn’t even know.” All of that occurred because another ally said to him, “Do this, wear this, think about saying this, show up, and lead.”

You will be surprised. People will say, “Thank you for asking. Yes, I’ll do that.” There is an untapped group of people who need to be directed, identified, told what to do, and encouraged. They will see the positive results that happen.

DOUG FORESTA: What’s so beautiful about that is a lot of times people will say, “What can I do?” You’ve just given them something to do. If you don’t know what to do, go back and listen to this, you’ll know what to do.

JENNIFER BROWN: And thank you, Doug, for being such a tremendous ally, yourself.

JENNIFER BROWN: You’ve been such an active participant in all of my podcasts. For those of you who don’t know the role that Doug plays, talk about an ally. You’re digging into diversity stories, we’re brainstorming about the stories that our guests can tell, and we’re always looking for visible and public leadership in particular by allies. Doug, I know that you really walk the talk, so I want to thank you.

DOUG FORESTA: Thank you so much. Thank you, Jennifer. It’s a pleasure.